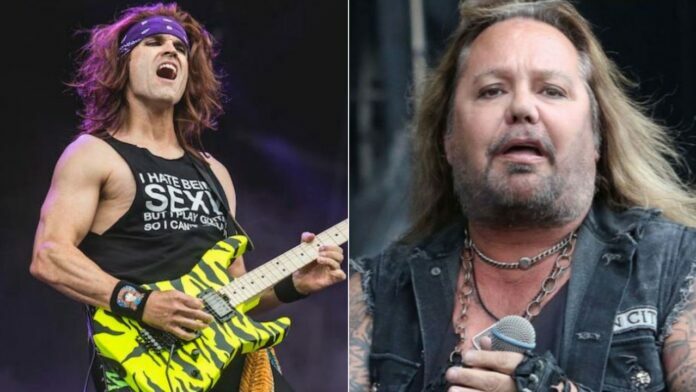 Steel Panther guitarist Satchel has once again mocked Motley Crue singer Vince Neil due to his overweight and low performance and stated that he’s been enjoying making fun of him.

As some of you might know, Steel Panther and Motley Crue members have been struggling with each other. For over the years, Satchel, who’d previously said that Neil has never been a great live singer, has been speaking about Vince Neil to mock him. Motley Crue members respond to him to defend their bandmates.

Besides Vince Neil, Satchel has also spoken out about Nikki Sixx and Tommy Lee in the past. He’d stated about the musicians that they’re acting like total dickheads much of the time.

Recently, Satchel has appeared to talk about Vince Neil and Motley Crue once more. During a recent 2020’s Podcast, the guitarist looked so brave to mock Vince Neil. He told Neil is an easy target and low-hanging fruit.

“Nikki Sixx hates Steel Panther, I don’t know why he hates us so much. We could get along so well. We both make fun of Vince Neil – he is an easy target, he’s low-hanging fruit.

“When you have that much talent and that much… I mean, he’s a great-looking guy.”

Satchel has also recalled a weird story he lived with Don Dokken. He mentioned M3 Festival in Maryland and said that he thought at first when he saw Don Dokken that he’s a homeless-looking guy.

“Did you ever hear of that M3 Festival in Maryland? We played there a few years ago – and we had never played there before. I was wandering around and I found the place where all the bands go to eat – I wish it was a pizza, the food was not good.

“And I saw Michael Starr, he was across the way, and I was like, ‘Oh, shit, Michael’s sitting next to some homeless guy who’s losing his hair and he’s got fucked up teeth, and shit… Well, fuck it, I’ll go sit next to Michael and the homeless guy.’

“And I went and sat down, and I was like, ‘Oh shit, that’s not a homeless guy, that’s fucking Don Dokken!’

“And I sat down next to Don Dokken and Michael, and Don was so talkative, he was really a nice guy, he was talking about how he likes to plant flowers in his backyard or something. I think he was full of shit.”