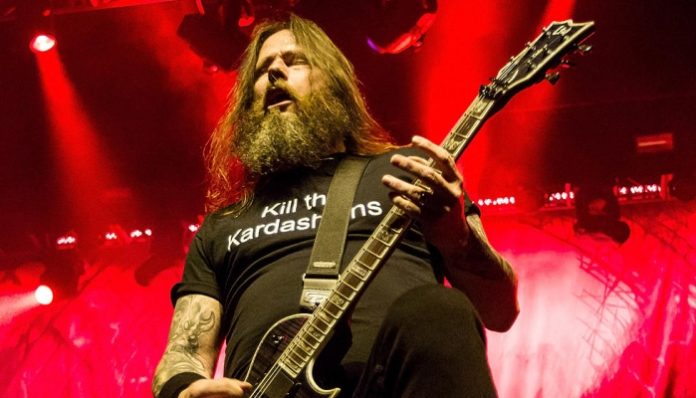 Gary Holt, the only unchanging member of the American thrash metal band Exodus, has just sent a photo through his official social media account and introduced “Holt Awaits”, the new version of “Kill The Kardashians” t-shirt.

In a statement he shared, Gary stated that no more t-shirts would be sold to Indonesia and China due to bootleggers, and used bad words about them. He also mentioned the size of the shirt and said its SMALL through 3XL.

“THEY’RE BACK! The ‘Holt Awaits’ version of the KTK shirts! Up now in the eBay store! Sizes small through 3XL! No more buying them from China and Indonesia! Fuck the bootleggers! Get em from the Officer! Link as always in my profile!”

Also, in the middle of January, Gary Holt introduced the super rare plexiglass laminate through his Instagram account and stated that the new items include stage used picks from the two final Slayer shows in Chile, Santiago, stage shirts, and many more.

THEY’RE BACK!!!! The “Holt Awaits “ version of the KTK shirts!Up now in the eBay store!! Sizes small through 3XL!! No more buying them from China and Indonesia !! Fuck the bootleggers!😆Get em from the Officer!!!! Link as always in my profile!!