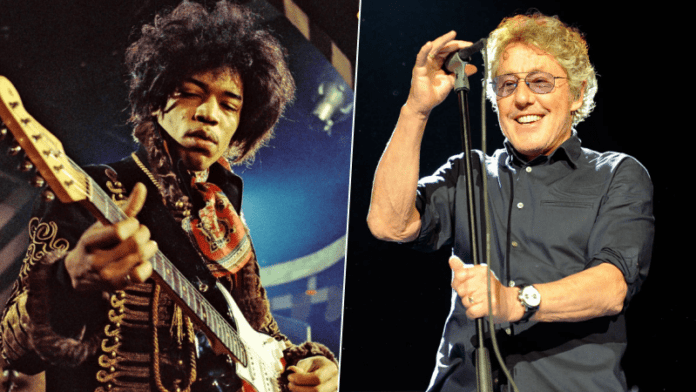 Roger Daltrey, known for the singer of the English rock band The Who, spoke on How to Wow and made flash comments about one of the greatest musicians ever, Jimi Hendrix.

Jimi Hendrix, who died from barbiturate-related asphyxia at the age of 27, signed so many achievements during his short but legendary career. His reaching number one in the United States with his third and final studio album, Electric Ladyland, was just one of those.

Recently, The Who singer was asked about Jimi Hendrix and his guitar-smashing antics. Speaking about Jimi Hendrix, although the successful singer touched his greatness, he made flash comments about him and admitted that he copied his style from Townshend.

“Jimi was an absolutely amazing performer, but what people don’t realize is that a lot of Jimi’s showmanship, when he started digging his guitar into the amps and the feedback and all that, most of that he copied from Townshend.

“So by the time we got to Monterey in ’67 [where Hendrix set his guitar on fire], Pete’s going, ‘Well, that’s my whole show!’ And it was always a great finale.

“You know, we didn’t really quite have confidence in the music. We were a pop band with these weird singles like ‘I’m a Boy’ and ‘Happy Jack’ and a mini-opera called ‘A Quick One While He’s Away.’ It was insane, the stuff we were playing!

“So we thought, well, we’re gonna get slaughtered if he goes on before us. Because that’s our whole show, done. So Pete and Jimi flipped a coin and Pete won and we chose to go on first.

“But then, of course, Jimi came on and blew us all away anyway.”