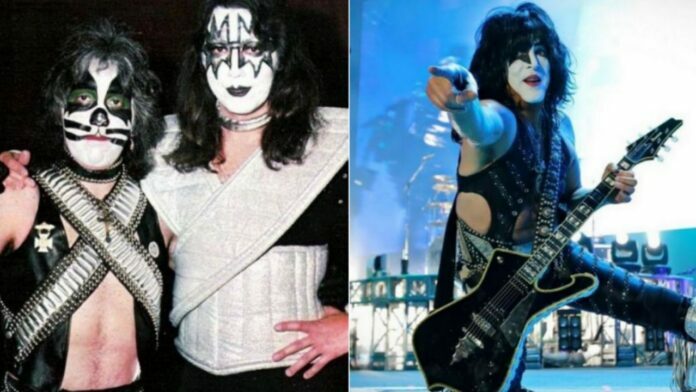 KISS guitarist Paul Stanley has spoken out excitingly on the band’s original members Peter Criss and Ace Frehley‘s involvement in the band’s ongoing “End Of The Road” tour as a guest appearance.

Recently, Paul Stanley was if Ace Frehley and Peter Criss will take part in any KISS shows on the “End Of The Road” tour. Paul Stanley made heartwarming comments and excited people who want to see them on stage with the band.

Paul Stanley Says ‘Anything Is Possible’

When the interviewer asked if the original members will join them, Paul Stanley said the first time that anything is possible. He also revealed Peter Criss and Ace Frehley‘s impact on the band. Paul said there is a balance about that.

“So you have to put it into some sort of balance and perspective.”

Paul Admits He Is Open To Include Them In The Tour

The legendary guitarist admitted while continuing his words that he is open to include Ace Frehley and Peter Criss in their farewell tour.

“If there is a way to include them in celebrating the final tour, yeah, I’m open to it,” Paul admitted. “It has to make sense and it has to feel right, because the band has existed far, far, far too long without them to let anybody spoil this or make it less than it should be. If there’s no joy in it, I’m not interested.”

In 2020, Ace Frehley has opened up about his reunion possibility with his former band KISS. He revealed what he expects from the band for the reunion.

“Everything’s cool. What’s gonna happen is gonna happen. But everything is delayed at this juncture, so who knows? … I’m doing my own thing. Unless they come forward and the price is right, you’re not gonna see me anywhere close by.”