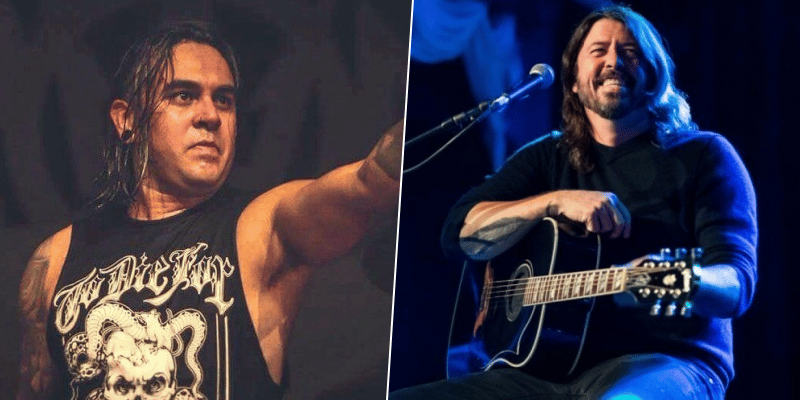 The world-class heavy metal band Lamb of God drummer Art Cruz spoke to “Radioactive Mike” and recalled his reaction to weird question Foo Fighters star Dave Grohl asked to him on past.

While he talks on the issue, he said that Dave asked him a question about how they doing the double kick. When he revealed his reaction, he said that he thought Dave was kidding him.

When he was asked, “Was it weird having Dave Grohl looking over you? Did he ever drop by in the studio or anything?”, Art Cruz replied:

“Yeah, a couple of times he was there – he does a lot of his band’s stuff there, and the Foo Fighters keep all their stuff there anyway, so he dropped in a few times.

“I remember right before we were actually starting to officially do takes, just kind of getting tones and stuff with the kit in the room, he had jumped on the kit, he told me, ‘I don’t know how you guys do this with your double kick.’ And I’m like, ‘Are you out of your mind, man? Come on!’

“And then it was just one of those things, we had a couple of conversations here and there – we talked a lot about music and where music’s come as far as it is and technology and how we were growing up as kids, buying kits, or trying to buy a kit, and making one kit last for years and years, and things like that.”

While he concluding his words, Art praised Dave Grohl and said that it was a great experience that worked with Dave Grohl. He also added that he’s the rockstar’s rockstar.

“So it was a really cool, special experience to have someone like Dave. And Dave has always been so genuine and cool and very down-to-earth; he’s like the rockstar’s rockstar – if anybody can put it that way, that’s the way I see it. He’s just so kind, and he keeps it real, that’s the best part about it.”

Art Cruz rocking with the band officially since 2019 following his one year touring experience.