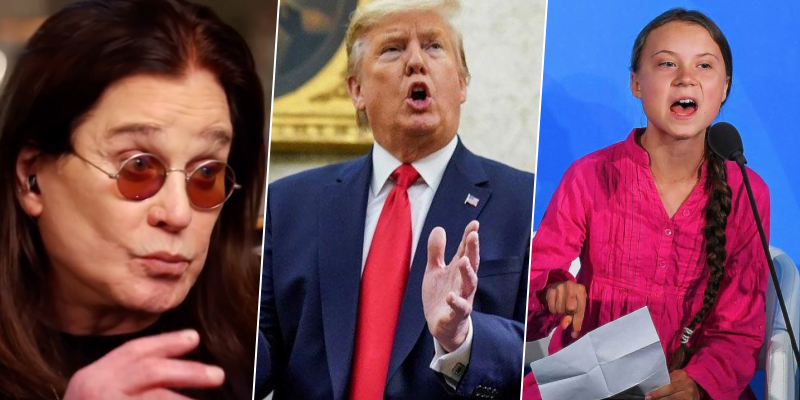 In a new conversation with Good Morning Britain, Ozzy Osbourne, best known as the member of the English heavy metal band Black Sabbath, and his manager/wife Sharon Osbourne have talked about the current President of the United States, Donal Trump, and the Swedish environmental activist Greta Thunberg.

When the interviewer asked, “This country, America, can it take four more years of Trump?”, Ozzy Osbourne replied:

“When he wins – I’m sure he’s gonna win now, I don’t think there’s anybody else to get there.”

“All I know is that he’s taken politics down to a level that I don’t think it should be at,” Sharon added. “I think that you should be able to debate on the subject, not take personal shots. He shoots from the hip, and the thing is he has done some good things, but as far as a representative, I would rather have Obama.”

Ozzy continued, “He gets things, he gets everybody moving, whether you agree with him or not. I don’t understand politicians, they all should form one big huge rock band and see how they play.”

Sharon Osbourne: “Oh, he’d try anything, Trump, if there is an audience.”

While they talks about the Greta Thunberg, Sharon Osbourne said: “She’s amazing.”

“She’s cool, but why do we have to go, ‘Oh, we’re listening now,’ when all the adults for ages have been going,” Ozzy added.

Sharon Osbourne said: “I think because what she states is: ‘You’re all gonna die, but it’s affecting my generation,’ and I think the world needed that from somebody of her age because you know that she must have a huge army of people behind her.”

Ozzy: “She didn’t sound like it comes from her. It’s too well put together for a young kid.”

The Prince of Darkness, Ozzy Osbourne, has released his latest and twelfth solo album Ordinary Man on February 21, 2020, through Epic Records.

Ozzy Osbourne, who has been struggling with illnesses in the past years and has not been able to get rid of his diseases, showed us once again that nothing can stop him and why he deserves the nickname The Prince of Darkness. After his twelfth and latest solo album Ordinary Man, Ozzy Osbourne recently announced that he working on a new album.