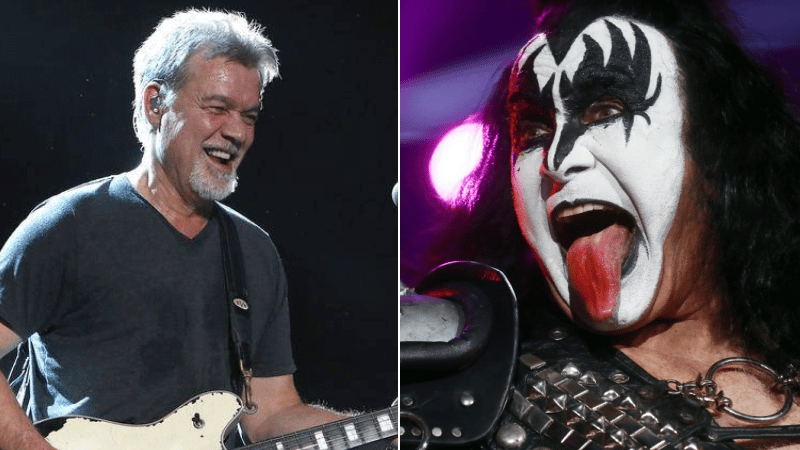 Gene Simmons, known for the bassist of the rock band KISS, made one of the latest interviews with “The Dennis Miller Option” and took fans back to the weird moment he lived with the Van Halen star Eddie Van Halen.

After Eddie Van Halen’s losing his battle against cancer and tragic passing on October 6th, unheard and rarely known stories came out from the rockstars who were friends with him. This time, Gene Simmons appeared to mourn Eddie Van Halen and shared a rare story about him.

Speaking about the moment he lived with him, Gene Simmons mentioned his and Eddie’s being backstage of the heavy metal giants Metallica on their Southern California show. Gene Simmons started his words by touching Metallica’s raising and continued Eddie’s request from him.

“Metallica was coming up in the world. And we all started to hear about this new band and stuff. So I went out to Long Beach Arena, had a limo and bodyguard — all that stupid rock star stuff. And backstage, Edward comes up, ‘Hey, man, what are you doing?’ ‘Checking this band…’ ‘Yeah.’ In fact, I jumped up on stage with the guys and we did ‘Cold Gin’ together.

Gene Simmons added that he thought while Eddie was driving that he was scared to death. He explained why he was so scared and said that their vehicle has no doors.

“So he puts me into this old jalopy thing with no doors. Ever see [the American war comedy-drama television series] ‘M*A*S*H’ with those helicopters that don’t have doors on them, and they’re flying sideways and you think you’re gonna die? This thing’s got no doors. It’s got seatbelts. And Edward’s smoking away like a chimney and driving what I thought was a hundred miles an hour up the 405 [freeway]. And I’m holding on for dear life and trying to pretend that I’m a guy without fear and all that. [I was] scared to death. And I said, ‘Eddie, Eddie, slow down.’ And a cigarette was hanging out of his mouth, and he said, ‘Why?’ I didn’t quite know what to answer.”