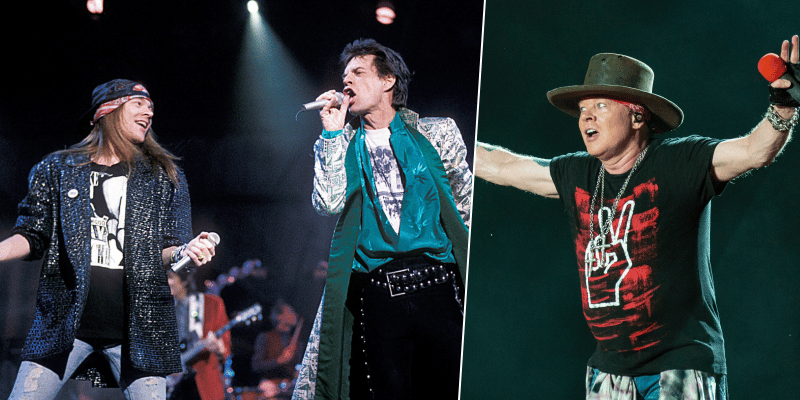 When he remembers those days, manager spoke to Rock Talk With Mitch Lafon:

“Guns N’ Roses were offered the entire [1989’s] ‘Steel Wheels’ tour, but for reasons that you can research – I felt that that would be a disaster and passed on it, but we did end up getting an offer from Mr. Jagger to open in LA at two shows at the Coliseum.

“We ended up selling four shows at the Coliseum and doing that and getting paid a very handsome salary. The best part of it all was how Axl [Rose] arrived for the first show. Because he locked himself in his apartment, and we were half an hour from stage time, and he still hadn’t shown up at the gig.”

Alan continued his words saying that they asked help from the LAPD with the production manager for the Rolling Stones. He mentioned giving Axl‘s address to LAPD.

“I talked to Michael, the production manager for The Rolling Stones – he was a really cool and level-headed guy, as you’d expect around that class of band – I said, ‘Do you have a friend in the LAPD who will do something without asking questions?’

“He said, ‘Yes, and I don’t know what you want to ask him, so I’m going to leave the room.’ And this guy came in, and I gave him specific instructions.

“I told him where Axl is, gave him the address, and I said, ‘You send two uniforms right there in a black and white right now, and if they have to kick the door down and put him in handcuffs…’”

Alan concluded stating how Axl Rose arrived to the show.

“That’s what they did. They put him in back in black and white, and they brought him as fast as possible, right now. And that’s how Axl arrived to the first show opening for The Rolling Stones: in the back of a police car under the threat of handcuffs.”

The Rolling Stones played “Start Me Up,” “Sad Sad Sad,” “Mixed Emotions, “Angie,” “Miss You, “Ruby Tuesday,” “Paint It Black,” “Gimme Shelter,” “Brown Sugar,” and many songs at the show.