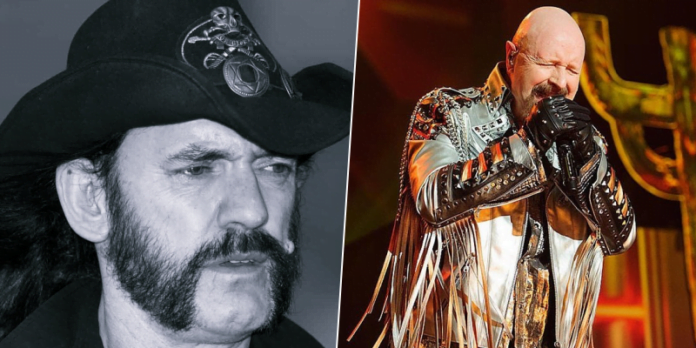 In a new appearance on Louder Sound, the English heavy metal band Judas Priest legend Rob Halford has talked about the Motorhead legend Lemmy Kilmister and recalled the rare-known moments he lived with him.

During a fan Q&A session, Rob Halford was asked a question about the legendary musician Lemmy Kilmister. When a fan asked, “What’s your best Lemmy story?”, Rob replied:

“There’s also a bittersweet one regarding a photo on my Instagram. After a South American tour together we were heading back to Los Angeles. It had been a long, long flight.”

Also, Rob said he went to while Lemmy was sitting alone and thanked him for the tour they played at that time. Remembering how he took their last photo with Lemmy, Rob was very upset when he voiced them.

“Lemmy had been sitting by himself and you generally didn’t want to get too close to him if that was the case, but I went and said thanks for a great tour. We had a bit of a chat and internally I felt something was going to happen. [Rob falls silent, trying to compose himself].

“Sorry… that’s an upsetting memory. I asked him for a selfie and he said fuck off, but we took it anyway and it’s the last photograph of me and Lemmy together. I still miss Lem and everything he stands for in rock ‘n’ roll. But the music will last forever. That’s what I tell myself whenever I’m feeling down.”

The English rock band Motorhead member Lemmy Kilmister has died at the age of 70 in 2015.

Joe Satriani Answered If He Will Write A Song About Coronavirus

Queen’s Brian May Excited The Fans: “We WILL Rock You, Again”

Joe Satriani Answered If He Will Write A Song About Coronavirus

Queen’s Brian May Excited The Fans: “We WILL Rock You, Again”

At MetalCastle we publish videos, tours, photos, lists and news about all Rock & Metal World.
Contact us: contact@metalcastle.net
© MetalCastle. All Rights Reserved 2019.
We use cookies to ensure that we give you the best experience on our website. If you continue to use this site we will assume that you are happy with it.OKPRIVACY POLICY