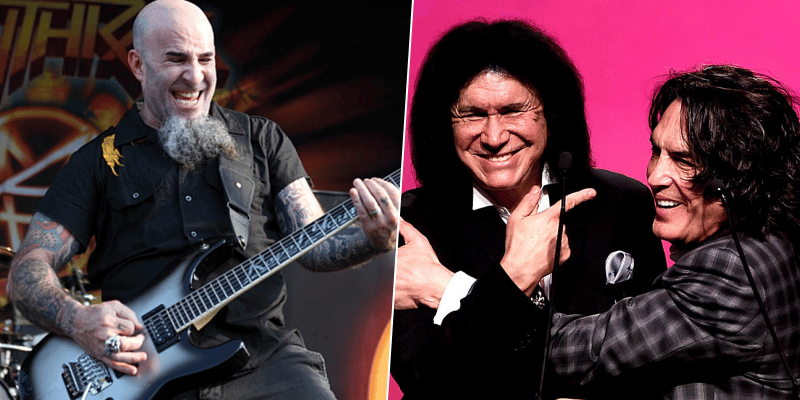 During a new conversation with Ben Fills In, Scott Ian, rhythm guitarist of the American thrash metal band Anthrax, has talked about the legendary rock band KISS and revealed his unheard moments about them.

While he talking about the issue, Scott Ian said Gene Simmons is the rockstar that he considers to be rockstar and talked about the other KISS members.

“Gene Simmons is a rock star, guys in bands like that, guys that keep the generation before me, those are guys that I consider to be rock stars, the guys that I look up to and who have influenced me.

Scott has also recalled the first time he heard KISS and took his fans back to his 11-aged. He said the first track he heard from KISS was the “Rock N’ Roll All Nite.”

“I was 11 when I first started listening to KISS, and for me, it was a combination of – I love the music because I heard KISS before I even ever saw what they looked like.

“I heard ‘Rock N’ Roll All Nite’ on the radio, and I loved that song, and then I saw what they looked like, and I liked them even more because I was a comic book fan, and I was a horror movie fan, so KISS kind of was everything I loved. It was rock ‘n’ roll, it was horror; it was comic books.”

He continued: “As I got a little older, maybe not necessarily be a guy in a band wearing makeup and blowing fire – Gene was there doing that, and that seemed so impossible and larger than life, but the idea of being in a band certainly was maybe the biggest influence they had on me because I loved Kiss so much.

“And they opened that door for me as a kid into the world of music and wanting to play guitar and wanting to be in a band, I wanted to be a part of that world, so when I got into KISS, I basically got on a path that I’m still on today, it was because of them I’m still in love with the music.”