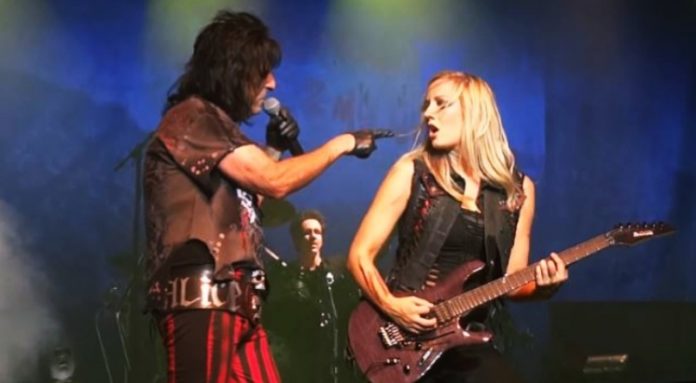 The Alice Cooper‘s touring guitarist Nita Strauss, who left the high school in her junior years to pursue music for full time, has recently shared a new photo on her official social media account and revealed a true story featuring her stage-mate Alice Cooper.

When we look at the photo, we easily seeing that Nita and Alice rocking the crowd on stage side by side as usual. Also, as we saw in the photo, Nita stood in front of Alice on her toes. That’s exactly why Nita Strauss shared the photo.

She described those moments as follows: “True story: this photo was taken the exact moment after Alice Cooper smacked the pick out of my hand mid solo. Always keeps us on our toes, that guy. What’s the funniest thing you’ve seen happen at a concert?”

In the comments of the photo, the successful photographer Tim March has recalled one of the rarest moments he lived with Alice Cooper. He said:

“I was covering Alice in Albuquerque NM, (I’m the house photographer) Alice was brandishing his sword. I came in for a close up and he jabbed the sword into my lens. His precision was uncanny, it didn’t go into the glass but into the filter ring. I laughed and I got a very cool shot.”

Nita Strauss replied Tim March‘s memory and said she had seen this before, and that Alice doesn’t like close-up.

True story: this photo was taken the exact moment after @alicecooper smacked the pick out of my hand mid solo. Always keeps us on our toes, that guy 😂 What’s the funniest thing you’ve seen happen at a concert? . 📸 @jonathangavin #alicecooper #guitarsolo #tourlife