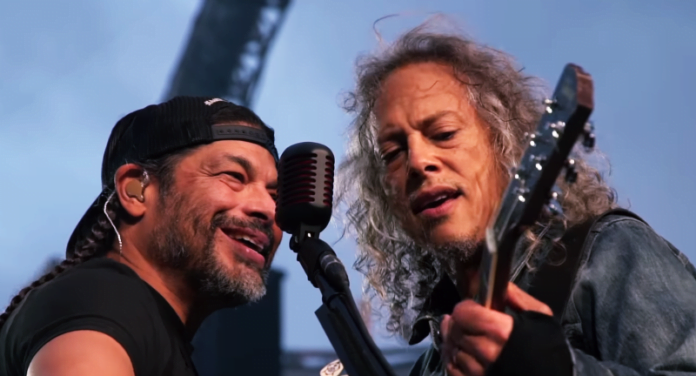 In a conversation with Sweden’s Cosmo Music, Kirk Hammett has mentioned about The Wedding Band and revealed more details about it and added that it’s “just really fun jamming” with his bandmates in the band.

“It’s something different. For Rob and I, it’s cool, because we get to indulge our love of funk and punk… I was listening to all sorts of crazy music in the ’70s – a lot of funk, R&B – so I’ve always had a real appreciation of the music of that time. When I found out that Rob did, we started playing our favorite songs. Funk from the ’70s is so unique, and it’s almost a lost art because no one is writing songs like that anymore…

Kirk also said that they have open to anyone to play with them and continued:

“I even asked the other guys in [METALLICA] if they want to come by and jam. [We’re] always open — this is not a closed-border sort of band situation. Anyone can come in and play, as long as they’re good…”

The tickets go on sale Friday 10 AM at www.ticketweb.com