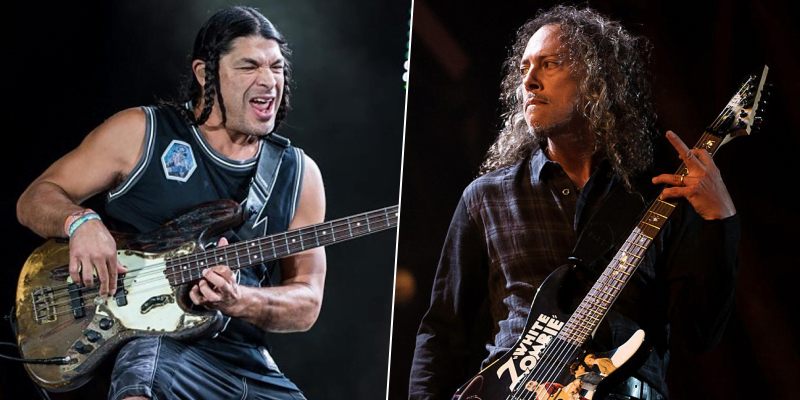 The 57-year-old guitarist Kirk Hammett, who joined the world-known heavy metal heroes Metallica after the firing of Dave Mustaine in 1983, has updated his official social media account with a special photo featuring his bandmate Robert Trujillo and celebrated his joining anniversary to Metallica.

In the post, Kirk Hammett shared two photos of Robert. In the first photo, Rob was playing the guitar alone, and in the second photo, Robert Trujillo, Kirk Hammett, Lars Ulrich and James Hetfield was appearing on the stage while performing a song.

“Happy 17th Metallica Birthday to a thundering metal funky stand-up legend of a man – Mister Rob Trujillo… rain or shine, you lay it down hard for all of us,” Kirk wrote in the caption of the photo he shared.

Also, Chloe Trujillo, the wife of the Robert Trujillo, has reacted to the photo shared by Kirk Hammett and put heart emoji as a comment to the photo.

At the comments of the photo, a fan made a joke about Robert Trujillo using Kirk Hammett‘s caption and said, “He sure does not look like he is 17 years old.”

On February 24, 2003, the successful guitarist Robert Trujillo, who received one million dollars from the band as an advance for joining Metallica, was joined them two years after Jason Newsted resigned.

Happy 17th Metallica Birthday to a thundering metal funky stand-up legend of a man – Mister Rob Trujillo … rain or shine, you lay it down hard for all of us. 🙏🤘⚡️🖤 @robtrujillo photos 📸by @brettmurrayphotography ⚡️