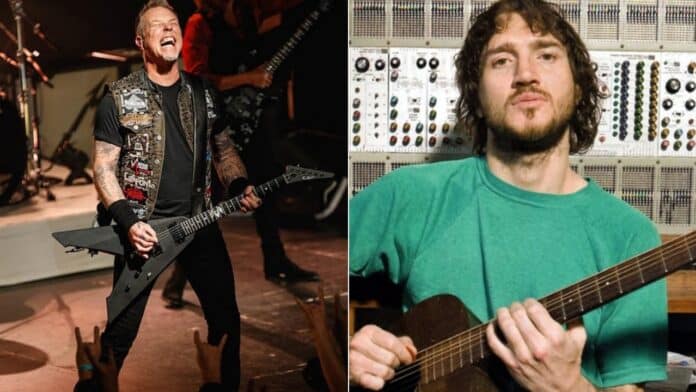 The 37-year rock band Red Hot Chili Peppers guitarist John Frusciante, who rejoined the band in 2019 after a 10-year breakdown, was guested to Double J and talked about electronic music by touching his band.

“I think when it started with the synth-pop and hip-hop and stuff, they seemed early, like, simple to me or something, and they didn’t seem very expressive, and little did I suspect as time went by very quickly, people started getting very expressive with sounds and very expressive in ways that you can’t be expressive on the other instruments,” John said.

He touched the year that he discovered the style and said that there were people that say it was impossible to do as a musician. John stated with his words that they’re wrong.

“Like, being expressive with samples and building up music with tons of samples all over the place, and that itself being a form of expression – I didn’t expect that at first, I just got on my own path.

“When I discovered by the late ’90s it had come so far, there were people being expressive with sound and beats in ways it was impossible to do as a musician.

“The conception of speed and fast tempos that comes from manipulating samples and using drum machines and stuff, it’s so completely different than what a drummer does.”

When John gave an example, the 50-year-old guitarist touched the heavy metal band Metallica‘s “Master of Puppets.” He continued his words by touching his pre-Red Hot Chili Peppers era and said that they’re played just like he mentioned.

“When I used to go see Chili Peppers, that’s how I saw them before I was in the band [John first joined the group in 1988], they’d play like this fast punk music, this fast, intense punk music.

“And for me, that’s basically what hardcore and jungle were – it’s just another way of doing fast and kind of going beyond what a drummer was capable of doing. I didn’t realize that synths and samplers and drum machines would outdo real musicians.”

In December 2019, Red Hot Chili Peppers announced through its social channels that they parted ways with the band’s guitarist Josh Klinghoffer to reunion with the band’s legend, John Frusciante.