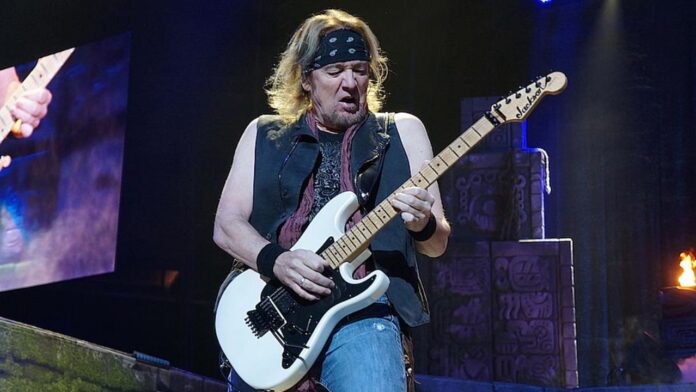 The English musician Adrian Smith, known as the guitarist of the heavy metal band Iron Maiden, talked about his band’s 40th anniversary and shared his honest opinion on being a band.

In a new interview with The Oakland Press, the 63-year-old guitarist was asked what he thinks about the band’s longevity and the successes they had during this time. When he revealed his comments, Adrian wished a weird thing to be more active.

When the interviewer touched on the 40th anniversary of Iron Maiden, Adrian said:

“I don’t feel like 40 years have passed. I feel the same pretty much. I wish I could go back and have the body of the 20-some-year-old then and have the mind I have now. [Laughs]

“In those days, you’re little more than kids. You’re going out and doing all this crazy stuff, headlining stadiums and being on TV and getting all this attention. It affects people in different ways.

“It certainly got on top of me for a while, and I had to sort myself out. But I did, and I’m very happy with what I’ve got now.”

Adrian Smith has recently released a new book named ‘Monsters of River and Rock: My Life as Iron Maiden’s Compulsive Angler,’ which was released on September 3rd.