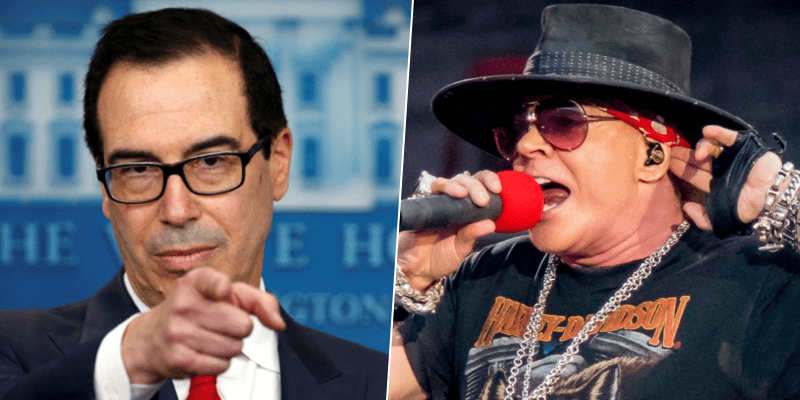 The 58-year-old musician Axl Rose, best known as the lead vocalist of the American rock band Guns N’ Roses, has talked about the U.S. Treasury Secretary Steve Mnuchin and called him an “asshole.”

Although the exact reason has not been yet, recently, one of the legendary singers in the rock community, Axl Rose, has updated his social media account to blast the U.S. Treasury Secretary Steve Mnuchin.

Axl Rose took his social media to share the following statement: “It’s official! Whatever anyone may have previously thought of Steve Mnuchin he’s officially an asshole.”

After Axl Rose‘s comments, the U.S. Treasury Secretary Steve Mnuchin has responded to his tweet and answered him. He wrote the following words for the response to him:

“What have you done for the country lately?”

The fans who follows Axl Rose split into two after Axl Rose shared his honest opinion for him. While some of them supports Axl, some of them found him wrong.

This is the second time that Axl Rose updating his social media account following his criticizing to California people after their protests against Governor Gavin Newsom.

What have you done for the country lately? 🇺🇸