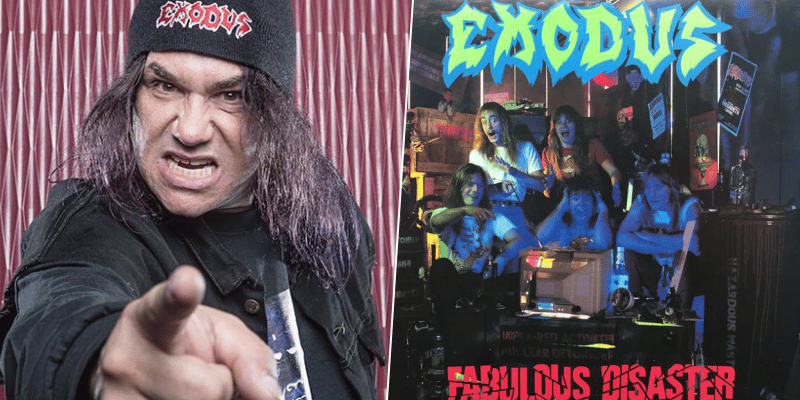 In a new appearance on Metal Hammer, the successful singer Steve “Zetro” Souza, best known as the vocalist of the American thrash metal band Exodus, has talked about the third album of Exodus, Fabulous Disaster, and revealed rare-known truths about it.

While he starts his words, he revealed how long the song The Toxic Waltz was written. He also confessed about the track and mentioned where he inspired.

“The lyrics were written in about 25 minutes, top to bottom. All I did was, I copied the ’60s dance songs, like The Twist, The Mashed Potato, The Monkey… I even referred to them in the lyrics.

“All those songs did was go through, in a cool rhythm and rhyme, how to do the dance. The opening line, ‘Here’s a new dance craze that’s sweeping the nation,’ a lot of those songs started like that, so I just totally parodied that. But when I wrote it, I was in the mind of the pit going fucking crazy.”

Steve has also touched his speech with the band’s guitarist Gary Holt. When he told Gary Holt it was a joke and he would rewrite the lyrics, he mentioned Gary Holt‘s reaction. Also, Steve said he was surprised that this was their anthem.

“The next day I came to rehearsal and said, ‘Here it is, but dude, it’s a joke, I’m gonna rewrite it.’ So I hand it to him [guitarist Gary Holt] and he says, ‘This is fucking brilliant, dude!’

“I’m like, ‘Don’t be a dunce and dance like a runt?’ Are you kidding me? They won’t want this! This isn’t thrash, this is a joke!’ Who was to know that this would become our anthem, a song we’d have to play at every show?

“I didn’t expect it to be that way, I really didn’t. I thought ‘They’re gonna laugh at this,’ because I think I’m a funny guy!”

The 10-track Fabulous Disaster, the third studio album of the Exodus, has released on January 30, 1989, via UK label Music for Nations. Also, the US version was released on Combat/Relativity Records.