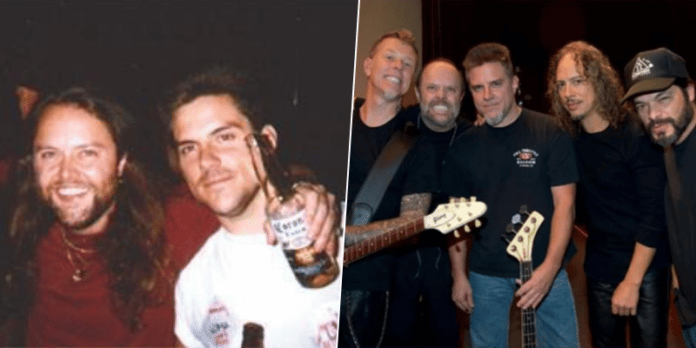 The original bassist of the world-famous heavy metal band Metallica, Ron McGovney, who left the band because of the constant harassment from the band’s first guitarist Dave Mustaine, has just remembered the interview they lived in the first days of the band and confirmed the weird truth about it.

The 57-year-old bassist added a new tweet on his Twitter account and quoted a Metallica fan page’s collage by remembering their San Francisco show. In the tweet he quoted, Ron was stating that although he didn’t remember which show they played was, he confirmed that they look a little bit tired.

When we look at the responses of the tweet, a fan asked a question to Ron about the moment Lars lived with the interviewer. Ron replied to it and remembered the funny story.

While a fan asked, “Do you recognise the woman Lars is clutching on to?”, Ron McGovney replied:

“Is she the interviewer in a video that says ‘Metallica: the hot band from L.A.’ And Cliff puts his head in his hands in the clip. Too funny. May be her.. not sure.”

The successful bassist appeared the early demos of Metallica before departing in 1982.

Not sure what @Metallica San Francisco show this was , but we look a little tired. 🤘😁🤘 https://t.co/MLdTOVBlFf