The Prince of Darkness, Ozzy Osbourne, known for his tenure with the heavy metal band Black Sabbath, is one of those craziest musicians in the community.

Ozzy, who has released twelve solo albums so far, got revenge on his teacher, drove to the hospital while drinking, shared cocaine with stewardesses, stripped in public, and made many more things that may surprise you.

10. Ozzy Osbourne Got Revenge On His Teacher

At the time while he was still in school, Ozzy was punished by his teacher Mr. Lane. His teacher was slapping Ozzy on the arse with a painful piece of wood.

Ozzy Osbourne, who pissed off his teacher after his behavior, liked to heat a penny for four minutes to get even. He put the burning penny into his teacher’s desk. Later that, Mr. Lane would pick up the penny yell out.

Ozzy Osbourne laughed at his teacher at some point.

As you know, Ozzy was a member of the Black Sabbath. They formed the band in the early ’70s.

During his very first tour with Black Sabbath, Ozzy Osbourne‘s hotel was invaded by a group of Satanists. The crowd started to yelling for Ozzy Osbourne at the time.

Later, Ozzy responded to them and sang to them the happy birthday song to get rid of those fanatics.

8. Ozzy Drove Drunk To The Hospital

In 1972, while Ozzy Osbourne in marriage with Thelma Riley, who was his first wife, she was pregnant for their first child. On January 20 night, she began giving birth to him. Later, she insisted he had to drive her to the hospital because the child was coming. The trouble was, Ozzy has no driving license and was drunk.

He drove drunk to the hospital, although he did not feel good.

7. He Shots A Group of Cats In Garage

While in marriage with his first wife Thelma Riley, Ozzy and Thelma had new cars. When Riley‘s newest car was scratched, Osbourne was pissed off and started to discover what caused that.

One day, he discovered that some cats were climbing on it while it was kept in the garage.

Later that day, Ozzy snaked into his garage and shot at a group of cats for revenge. He blasted as many cats as he could.

6. Ozzy Shares His Cocaine With Stewardesses

While flying to England in the past, Ozzy Osbourne was carrying four grams of cocaine. He was wondering how he dopes his coke through customs.

He decided to give his cocaine to the stewardesses to take them through customs.

5. He Strips On Table In Public

During his Blizzard of Ozz tour, Ozzy Osbourne has eaten dinner with some straight-laced people. In the middle of their dinner, he climbed onto the table and started to do a striptease.

Even so, Ozzy did striptease once naked. Meanwhile, he urinated a man’s glass of wine.

This behavior caused him to get banned in Germany. He was not invited back to the country for many years.

4. Ozzy Arrested By A Cop For Peeing On A Police Car 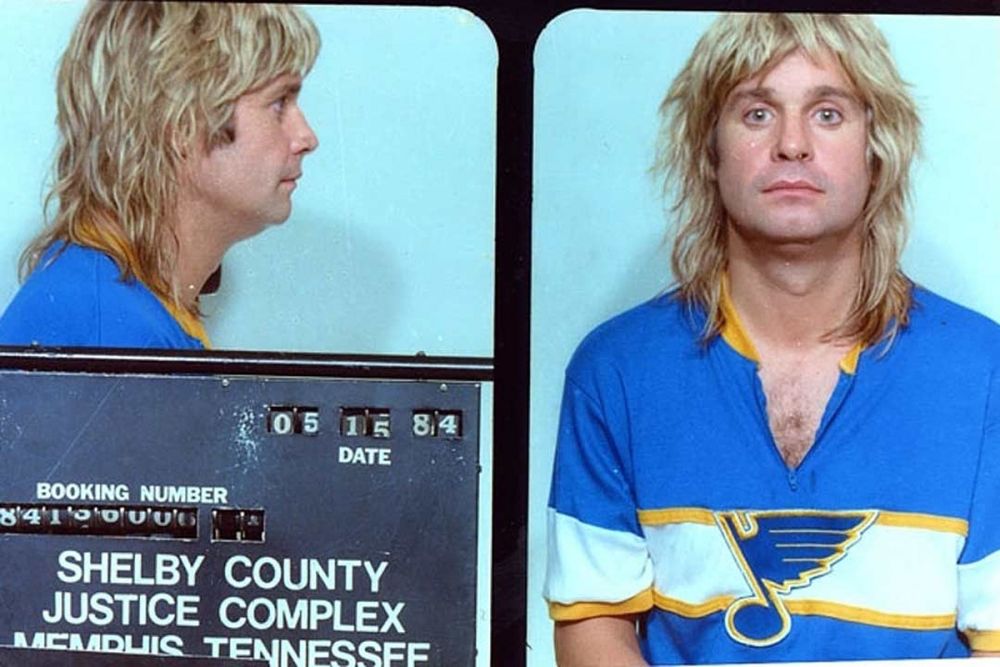 During his visit to Memphis, Tennessee, Ozzy Osbourne, one of the craziest people in the music community, was drunk and looking for a place to pee.

He found a white car and took a pee on the wheel of the car. Later, he discovered that that was a police car that was unmarked.

He was arrested by a cop for taking a pee on the car.

3. He Slips A Doom Dot Into A Woman’s Drink

One night while flying somewhere, Ozzy was disturbed by a woman who was sitting in front of him. Then, Ozzy slipped a doom dot into her drink. Soon, she fell asleep.

This Doom Dot was a so-called Mickey, which is a gel cap containing chloral hydrate.

2. Ozzy Osbourne Embarrassed Himself At A Dinner In White House

During the administration of the 43rd president George W. Bush, Ozzy Osbourne was invited to the White House. He drinks too much and became drunk. Ozzy started to screaming in front of 1,800 people.

Following Ozzy‘s disrespectful act, the president said, “This might have been a mistake.”

1. He Bites The Head Of Bat

During a show, a fan in the crowd has threw him something. Firstly, Osbourne thought that it was a plastic. He bit the head off.

Soon later, Osbourne realized that something wrong. It was a real bat and spit out a live bat to the crowd.

Following this, Osbourne had to get rabies shots.