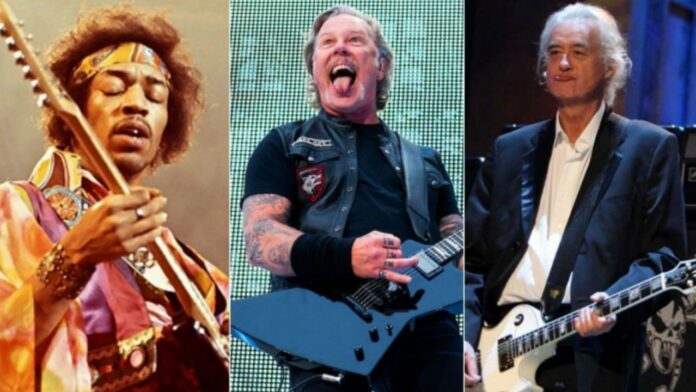 If you ever wonder what is the greatest guitar riff of all time, you are at the right place.

These days while the rock and metal music industries went to modernism, old epic works are still some of the legendary efforts.

In the list, there are such great bands and musicians including Led Zeppelin, Black Sabbath, AC/DC, Jimi Hendrix, Ozzy Osbourne, Metallica, Van Halen, and more.

What is the greatest guitar riff ever?

Scrolling, you can reach the 10 greatest riffs ever, according to the readers of the Guitar World and Total Guitar magazines.

The Grammy award-winner track Purple Haze is an epic work of one of the greatest guitarists of all time, Jimi Hendrix.

Jimi Hendrix‘s Purple Haze is the 10th greatest guitar riff of all time according to the readers.

La Grange is an incredible song released by ZZ Top, the American rock band that formed in 1969 in Houston, Texas.

The band unveiled the song through their third studio album that was released in 1973, Tres Hombres.

As you know, the song received extensive radio play, raising  number 41 on the Billboard Hot 100 in June 1974.

The band’s legendary guitarist Dimebag Darrell performed the riff at a soundcheck during the tour for Cowboys from Hell. The rest of the band loved the effort and congratulated him.

The song was released through the band’s Vulgar Display of Power in 1992.

Iron Man from the English heavy metal band Black Sabbath is the seventh greatest guitar riff of all time.

The song has earned several successes since its release. It included Billboard’s Hot 100 list, Canadian RPM Magazine Top 100. The live version of the song won the Grammy Award for the Best Metal Performance in 2000.

Enter Sandman from the heavy metal band Metallica is the sixth greatest guitar riff on the list. The track is taken by the band’s self-titled fifth studio album.

It was written by the band’s three great musicians, James Hetfield, Lars Ulrich, and Kirk Hammett.

Van Halen‘s Ain’t Talkin’ ‘Bout Love is the fifth greatest guitar riff of all time, according to the readers.

The song was released in October 1978 as the third single from their 1978 debut album, Van Halen.

The song earned several successes since its release.

Deep Purple‘s Smoke on the Water is the fourth greatest guitar riff.

The track has released in 1972 and earned huge successes.

Back in Black is a song of the Australian rock band AC/DC.

It was released through their seventh studio album, Back in Black.

Crazy Train from Ozzy Osbourne is the second greatest guitar riff of the rock and music history, according to the readers.

Whole Lotta Love from Led Zeppelin is the greatest guitar riff ever in the world.