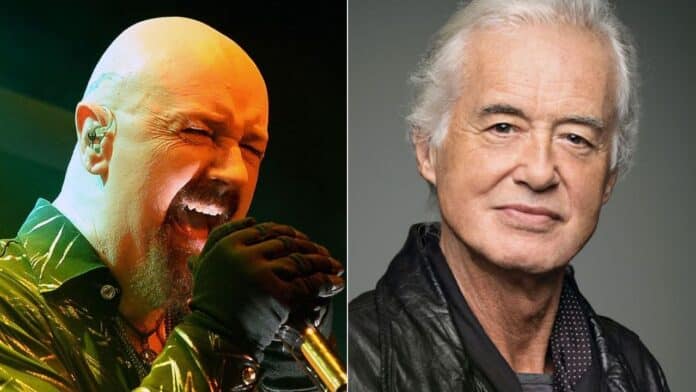 Jimmy Page, the founder and guitarist of the English rock band Led Zeppelin, recalled a golden story including Judas Priest legend Rob Halford and took fans back to the moment that Rob Halford takes him into the Iron Maiden show.

As some of those who follow Jimmy Page on Instagram might know, he updates his official Instagram account to remember his past and reveal some rarely known stories under the name of the ‘OnThisDay’ social media series. Every day, he shared new stories and photos to inform fans about his past.

This time, Jimmy Page mentioned Iron Maiden’s 2001 Rock in Rio show and remembered that day. In the social media post, there was a young photo of himself. He looked very handsome in his outfit. Also, according to him, he was waiting for the show of Iron Maiden and signed a guitar for a charity.

“On this day in 2001, I saw Iron Maiden perform at Rock in Rio,” Jimmy Page said. “Because I was in Brazil, it gave me an opportunity to take up an invite to see Iron Maiden perform at Rock in Rio. Rob Halford, from Judas Priest, kindly gave me a lift to the site in the helicopter and here is a photo of me backstage playing a guitar that I believe was signed for charity.”
⁣
Jimmy Page also stated that Brazilian people is one of those greatest fans, saying, “Iron Maiden filmed this show with one of the best audiences in the world. Always memorable, the Rock in Rio – Brazilian people know how to enjoy themselves at even the smallest party so you can imagine what they are like at a major festival!”