In a new appearance on Revolver, Iron Maiden singer Bruce Dickinson has recalled injuring his right Achilles tendon while informing fans about the current state of him about the illness.

As some of those Iron Maiden fans might remember, in the spring of 2019, the band entered Guillaume Tell Studios in Paris to write and record an album. Unfortunately, in the midst of finishing the record, Bruce Dickinson injured his right Achilles tendon and shocked entire Iron Maiden fans.

Also, Dickinson has recently given a sad health update to fans and told them that he has tested positive for COVID-19. As a result of the incident, the musician was forced to postpone his spoken tour.

Recently, the musician was asked how he feels on his Achilles these days. Saying that he feels good on Achilles, the musician detailed how he reacted to the moment when he detected the first time.

“At the end of April, just about ten days before I finished all the vocals, I was fencing, and all of a sudden, it just felt like someone had given me an electric shock in the back of my right leg. I was on the floor, and I looked at my leg, and my foot was kind of not really connected to the rest of my leg. I was like, ‘Well, that’s kind of weird!’”

Dickinson Says He Finished His Vocals Whatever It Takes

Dickinson also touched on what he did when he injured his Achilles in the middle of the recording vocals. He said that he finished it while doing rehab on his calf.

“Thirty-six hours later, they stitched it back together in the morning, and I walked out in the afternoon on the boot, which I wore while doing the rest of my vocals,” Dickinson continues.

“And then, after I did the tour, I was still doing rehab on my calf, and all of a sudden my opposite hip was really hurting! Everybody said, ‘Oh, that’s because you were compensating for your Achilles,’ and yada yada yada, but when I went to the hip doctor and told him, ‘Hey look, this is really bugging me,’ he went, ‘Ah yes – that’s because you’ve got no cartilage left!’ I said, ‘Do I need a new hip?’ and he said, ‘Yeah, you will.’” 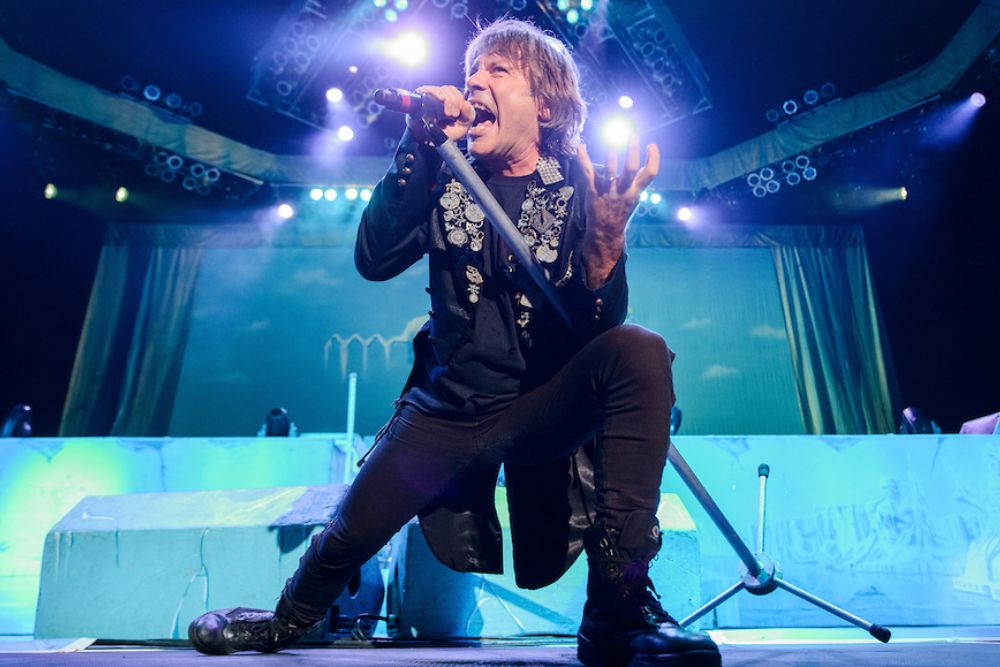 Detailing his current state of Achilles, Dickinson said that he decided to swap it out. According to Bruce, he had five and a half inches of titanium hammered into his femur since last October.

“So I did two or three more months like that and said, ‘Can we just swap it out?’ Dickinson asked. “Because we were all on lockdown, and it wasn’t like I had anything else to do for the next two or three months.

“So last October, I had five and a half inches of titanium hammered into my femur, and now I’m back fencing, training, doing everything.

“My physio says I can pretty much do anything on it, so I am really looking forward to getting back to the States as soon as I possibly can, and then you can see me leaping from tree to tree and monitor to monitor!”