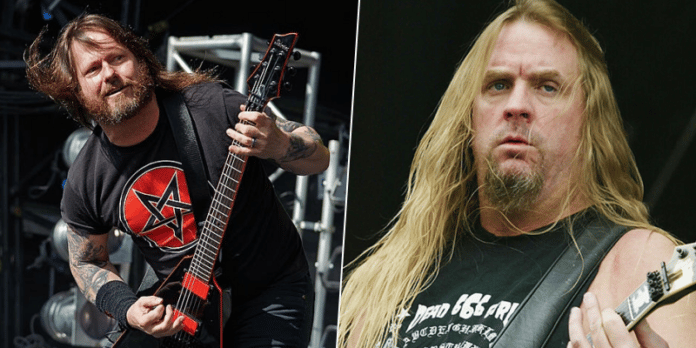 The 56-year-old musician Gary Holt, known with his 8-year career with the Grammy Award-winning thrash metal band Slayer, has recalled the last show he played with the legendary musician Jeff Hanneman, who died at the age of 49 due to liver failure on May 2, 2013.

During a conversation with “No Fuckin’ Regrets,” the successful guitarist Gary Holt was asked about the last moment he lived with Jeff Hanneman. When he responds, Gary took fans back to their Big Four tour, which held at Empire Polo Club in Indio April 23, 2011.

“It was special to me because it was Jeff’s last performance, he said. He played the last two songs and I handed off the guitar, I grabbed a beer and I watched Jeff play his last songs.”

He continued by saying the show was epic.

“He gave me a big bear hug and went out, we traded places, and it was epic. And after the show, we got fucked up. I don’t remember a whole lot after that. I remember one of my friends who I will not name – I got a message from our production assistant: ‘One of your guests is in the parking lot, I think she’s in Mexico.’ It’s one of those nights.”

Gary Holt has just remembered Jeff Hanneman on his death anniversary and revealed with a post he shared through his social media accounts that the world lost him and his talents.