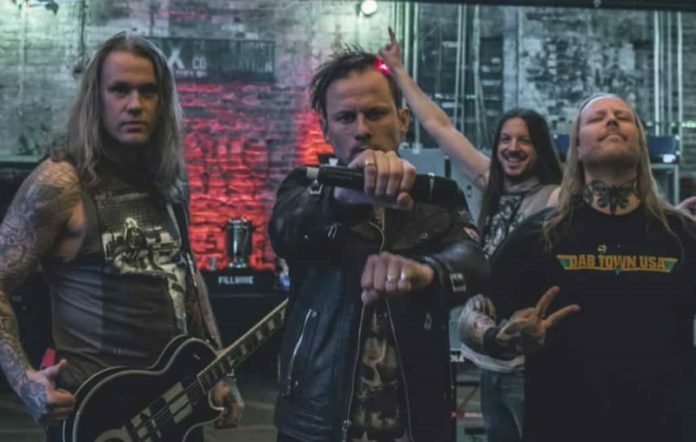 Cyhra recently published the official lyric video for the ‘Battle From Within‘. The track is taken from Cyhra’s second album, No Halos In Hell. The album will be released on November 15 by Nuclear Blast Records.

The lyric video was directed by Jake E. and the video’s participants are the fans and friends from all around the world.

Also, there was an emotional article in the description of the video: “My brother, Fredrik, was taken away from me and my family way too early. Just as so many other human beings who decide every year to leave this earth on their own initiative…”

"For over 10 years I pushed my feelings aside. I thought I was strong… but in reality I just kept digging that hole deeper and deeper. One day during the writing process of No Halos In Hell I was sitting by the piano, and while I was singing some gibberish to make up a vocal line for one of the songs, I felt something. And when I went back to listen to what I had just recorded, I realized that this was more than just gibberish to me. I guess it was my own mind that started to process things. My brother, Fredrik, was taken away from me and my family way too early. Just as so many other human beings who decide every year to leave this earth on their own initiative. When we discussed the video, I really didn't "just" wanna do another normal lyric video. My Fiancee came up with the brilliant idea to involve the fans. We contacted our fanbase through our social media platforms, and the response was truly beyond overwhelming. We got more participants that we could fit in! The subject was close to our fans hearts – and I am eternally grateful for their participation! My brother was strong, funny, and full of life and loved to work on his boat. This song is for people like my brother. I want them to hear this song before it's too late. We only have one life! And even if you sometimes feel as though life isn't worth fighting for, trust me, it is! When I look at my kids I can't stop thinking about what a fantastic uncle he would have been, and it hurts me that he was never able to meet them. I know how much they would have loved him. My parents lost a son. And me and my sister lost a brother. He is forever missed and loved as we keep fighting our battle from within." ~ JAKE E. The new CYHRA album 'No Halos In Hell': https://nblast.de/Cyhra-NoHalosInHell out November 15th. SUBSCRIBE http://nblast.de/NBytb PRE-SAVE & STREAM: https://nblast.de/CyhraPreSave Directed by : Jake E, Concept by: Pixie Keelyn Participants : Fans and friends from all around the world.