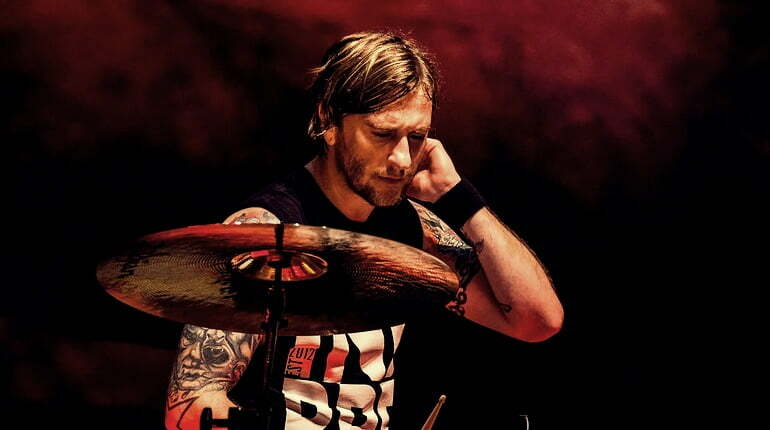 In a new interview with No Fuckin’ Regrets With Robb Flynn Podcast, Michael “Moose” Thomas, who played drum with Welsh heavy metal band Bullet For My Valentine from 1998 to 2016, has talked about his firing days and revealed unheard facts about it.

While he talking about the band’s fifth studio album “Venom”, Michael said that he left when the band playing their European tour and didn’t return. But he added that when he wanted to go back, no one answered his e-mails.

“We’d done the last album, which was ‘Venom’, which was kind of more back-to-the-heavier-roots type of thing, which I was a lot happier with; I think everyone was.

“And it was on that album we left – Jay, and then I left a year later. So we finished ‘Venom’ and then started touring ‘Venom.’ It was on the European tour cycle of ‘Venom’ that I left and didn’t return. I would have gone back, but no one answered my e-mails.”

Michael continued with his wife’s pregnant times. He said that he stayed with her until late 2016. After that, when he was thinking to return to the band next month, he encountered their rejection response.

“My wife was pregnant with our first child together, so I went on to be with her. So that was December 2016, when I was supposed to come back, for the American tour in January, the following month. And they said, ‘Oh, no. You still mind the baby.’ And I said, ‘Okay. Cool.’

“And then I was gonna come back for the Japan tour. And I was, like, ‘Okay, guys.’ nothing back. Then I started thinking, ‘Okay. I know what’s going on here.’ And then the drummer started doing a drum solo, and I was, like, ‘What the fuck?’”

Michael talked about his long-time friends not responding to his emails.

Michael also mentioned their disrespectful offer and got angry.

“And they’re, like, ‘Okay. Cool. Come back then.’ Then I find out – the manager takes me out to dinner – that the boys are going to record a song. And I’m, like, ‘Cool. When am I needed?’

“They were, like, ‘No. The other guy is gonna do it. But they want you to be in the video.’ And I was, like, ‘No. I’m not doing that.’ That’s not the way I work. That’s when I knew they didn’t want me back. And then they called me up to London and said, ‘We want you to step down.’”