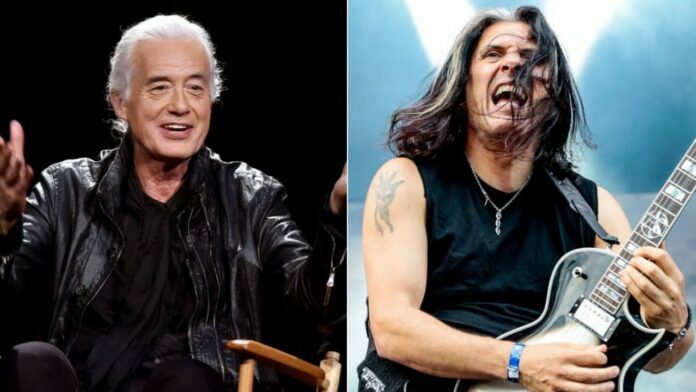 Testament legend Alex Skolnick has shared his honest opinion on several of the most controversial musical legal battles over “who wrote it first” and touched on Led Zeppelin‘s copyright dispute over Stairway To Heaven.

In the latest episode of his Moods & Modes podcast, Skolnick was discussing the battle against Led Zeppelin‘s Stairway To Heaven versus Spirit‘s Taurus and George Harrison‘s My Sweet Lord.

Opening his thoughts about the issue, the 52-year-old musician has argued that the two songs share a common chord progression and a bass line that has been used in music for centuries.

“A lawsuit over the instrumental part of a song is, for the most part, pretty fucking ridiculous – excuse my language,” he said. “It would open the doors to a veritable ocean of litigation. And it’s hard not to think that the Led Zeppelin lawsuit was the result of overly aggressive attorneys seeking notoriety, riches or both.

“After all, the songwriter represented in the lawsuit, Randy Wolfe, better known as Randy California, is no longer with us. And after a jury ruled in Led Zeppelin’s favor in 2016, these guys wouldn’t stop. They appealed the case, [and] the verdict was tossed out.”

Alex Reveals How The Case Was Closed

Concluding his words about the issue, Skolnick has revealed how the case was closed at the time, although it went to a higher court. He has mentioned the agreement that was taken from the judge and said that he declined to hear the case.

“Then it went to a higher court, who upheld the original verdict,” Skolnick adds. “These guys still wouldn’t stop. They took it all the way to the United States Supreme Court.

“Thankfully, the court – from [judge] Sonia Sotomayor on the left to Clarence Thomas on the right to everyone in between – all agreed: ‘We decline to hear the case. The verdict stands. Case closed.'”

As you remember, the claims had been brought from the trustee of Taurus songwriter Wolfe’s estate Michael Skidmore four decades after when Led Zeppelin released the song in their untitled album.